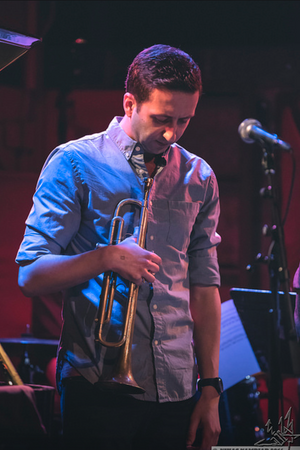 Brooklyn-based Trumpet/Composer/Bandleader Jon Crowley is one of the most forward-looking musicians of his generation. His various projects and groups have combined broad ranging influences from Satie, Death Cab for Cutie, Philip Glass, Chopin, to Miles Davis, showing him to be a musician who will not be bound by a single genre and one that is always looking for new possibilities. One thing that carries through everything he touches is his melodic and individual approach to the trumpet, that has been described as 'Highly personal; masculine, yet sensitive in timbre'.

Jon has recorded and released 5 albums as a leader; Connections(2009), At the Edge(2011), The Rehumanization EP(2014) and I Walk Amongst The Humans(2016) and Holding On / Letting Go(2018).  The title track from his debut album won the prestigious 'ASCAP Young Jazz Composers Award' in 2010 and his sophomore release made many critics' "Best of 2011" lists.  Jon has played and toured up and down the east coast at places such as 'Chris Jazz Cafe' and 'World Cafe Live(philly), Twins(DC), The Garage(VA) as well as The Blue Note, Lincoln Center and Smalls (NYC) with people such as Chris Potter, Joe Lovano, Ralph Alessi, mark Shim and Dave Pietro. In 2012 Crowley's band 'Heart of Darkness' was featured in Dave Douglas' FONT Festival that happens each year at venues around New York City

Crowley also has a BA in Music from Muhlenberg College and an MA in Jazz Performance and Composition from NYU, where he studied with Laurie Frink, John Scofield, Kenny Werner and many more. He taught privately from 2007 until 2018; including as an Adjunct Faculty member at NYU, as Trumpet Instructor at The Brooklyn Conservatory of Music and has worked with Jazz at Lincoln Center's WeBop early education program since 2010.  In 2017, Jon was one of 5 graduate students accepted to the Lincoln Center Scholars program receiving a full scholarship.  He graduated from this program in the spring of 2019, with a second masters degree in Music Education.  Jon has worked as a Music and Band teacher at The Hellenic Classical Charter School in Brooklyn NY since the fall of 2017.

Reviews of 'I Walk Amongst The Humans'

"The way that a sunbeam paints a thick streak of light across the room, with a sharp, controlled explosion upon the window pane and unfurling a blanket of warmth across the floor, that’s how trumpeter Jon Crowley paints melodies upon the surface of songs.  It has the presence of something tangible, something that can be grasped and bottled up, and it has the same power to captivate and lock in place both time and tranquility like that thick afternoon sunbeam blanketing the room in serenity.  It’s a talent that Crowley continues to display on his newest release I Walk Amongst the Humans."
-BirdIsTheWorm.com


"Crowley is an insightful player and composer who is all about textures here, as well as on his prior fine efforts. His playing and compositional approaches are thoughtful, intelligent and avoid pseudo-intellectualism. Both his pen and horn spin subtle images across the session. [...] Crowley's horn is warm, lush, vibratoless, sincere and wholesome. It's a vocal approach, more introspective and evocative than egoistic and intimidating"
-Nicholas F Mondello, AllAboutJazz.com

Reviews of 'The Rehumanization EP'

"This is a thoughtful, emotionally penetrating player. His near vibrato-less tone is robust, yet somewhat vulnerable.[..] While the Free Spirits, Smooth Jazzers, Giant Steppers and Beboppers each have their players and proponents, Jon Crowley, with his horn and pen almost has created a totally unique format with this recording and his prior efforts." - Nicholas F Mondello, AllAboutJazz.com

"For just under a half hour, the young NYU grad who has worked generally in the indie rock scene has made a clean, minimalist sound for himself that isn't necessarily geared toward jumping out of your chair but more toward tugging at your heartstrings."  - Anthony Dean-Harris, Nextbop.com

Reviews of 'At the Edge':

"This is the first I've heard of Jon's music and it's an introduction I'm thrilled to make. His sound on trumpet is ethereal, like a strong gust of wind that can be felt but not seen" - Micheal Ricci, Editor of AllAboutJazz

"Crowley is a musician who refuses to stand still. This Album is a fine example of the evolution of his work."- Tim Niland JazzandBlues.blogspot.com

"There's a mysteriously haunting and melancholic presence to trumpeter Jon Crowley's At the Edge. [..] His composer's pen lays broad, wide stokes with subtle flair. While the general format is subdued, a relaxed tension permeates the presentation. This is thoughtful and thought-provoking music. Crowley's tone is highly personal; masculine, yet sensitive in timbre."- Nicholas F. Mondello, AllAboutJazz.com

"At the Edge is a more intense adventure but shows a huge leap in compositional excellence from Jon Crowley. He is a voice that is worth your discovery now rather than later. Connections and At The Edge are documents of a great leader and composer in the making'- Stephan Moore; JazzWrap

"While Crowley might not be a household name just yet, this release announces, anoints and validates him as a fine jazz performer, writer and leader. [..] Crowley exibits maturity and a marvelously warm sound. His approach to the instrument is solid, controlled and highly lyrical"-Nicholas Mondello; AllAboutJazz.com


"On the evidence of its debut, 'Connections', Jon Crowley Quintet has huge potential. [..] The band's technical ability is uniformly strong, but technique never takes precedence over an emotional connection with the music--the result is a mature and thoughtful album that belies the youth and relative inexperience of the musicians. [..] This is an impressive debut."- Bruce Lindsay; AllAboutJazz.com


"Connections'[..] reveals Crowley to be a formidable talent on the rise. His taste leans towards meditative, harmonically deep compositions that create an atmosphere for exploratory solos. [...]- a thoughtful jazz explorer, happy to crest and undulate on waves of harmonic color as he caravans his way toward the horizon"- AllMusic


"Continuing the great track record of jazz musicians from Philadelphia, trumpet and flugelhorn player Jon Crowley has moved on to New York, earning his stripes with a wide variety of musicians. His debut album has the feel and passion of a Blue Note date from the mid 60's, but is still modern and fresh. [..] This was an excellent example of music being made by young musicians on the New York scene. Talented Performers drawing from a variety of inspirations" -Tim Nil, Jazz and Blues Blog


”Jon is a very inquisitive individual. He brings a sense of curiosity to his work that is contagious”
--John Swana


“Jon is an ambitious, young trumpeter and composer who had a bright future ahead of him. His compositions have a freshness about them due to their interesting harmonies and modern sensibility” --Dave Pietro